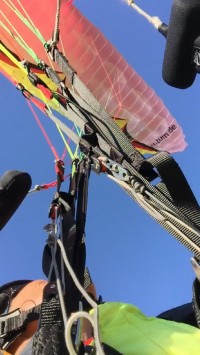 Skydivers are often very skilled pilots but in no form should this be taken for granted when converting.

Paragliders are more complex to fly, they maybe slow but are very instable, in turbulence that extra material can be technically harder to deal with.

Many of our Australian Paragliding schools who offer conversions have never skydived.

Skydivers may save money when doing a conversion course. What is the difference between conversion course and normal paragliding course - nothing! Skydivers might think they don’t need so much instructor time. Recent discussions with instructors have stated that it actually takes longer to retrain a skydivers bad habits. I think the key here is if an instructor has no experience with skydiver canopy you can’t expect him to express the vital points you need to get skilled quickly.

We recommend you Learn to fly paragliders with SKYDIVERS who are qualified PARAGLIDING instructors who understand canopy flight and landing skills. Look at the  "Learn to Fly" menu listed as Skydivers. Also just as a skydiver course doesn’t have any short cuts for a paraglider pilot, one should question the quality of a school who give a quick course for little money and if it’s actuelly legit.

There is plenty of skydivers who want to take up speed flying. So they mostly always buy undersized wings, float down to the beach while others paragliding pilots are still up and flying.

Paragliders are more advanced, complex to fly and groundhandle, skydiving canopies to land with increased sink at high speeds.

Hence a Skydiver maybe overly confident upto 20 knots. But under a paraglider he would have little to no control over the wing. Putting them in a high risk catagory in early training stages.

If appropriately licenced may he choose to downsize to an uncertified miniwing to fly higher wind strengths on the coast above 16 knots.

Based on novice skydiver a loading at 1.2 and under will determine his size. Loading is calculated per sqft.

Paragliding wings are weight certified labeled on the wing, most stay within a range of 20kg. Loading is calculated differently. Paraglider pilots rely on wings certifiation and generally do not calculate loading.

Certifactions and sizes explaind
Only advanced disciplines might this be used. Total weight 90kg divided by wing size in mtrs. An Average pilot would be 3 to 4kg per mtr. flat surface area. The higher the load the more dynamic the wing is to fly.


Launching paragliders: Groundhandling is the key to successful launching. This is a skill learnt on the ground before flight. Controling the wing in a stable manor, being able to hold it steadily overhead under your control.

Skydiving: canopy can take more turbulence than a paraglider. A skydiver is taught, do nothing.

Paraglider: Is closer to large high end elliptical canopies, although much slower. The difficulty level increases when launching inland or flying in turbulent and thermal conditions. Paraglider becomes instable and collapse with out initiating a correct timely input.

Paragliding wings need to be flown actively to keep them from collapsing. A fine balance of weight shift, asymetric and symmetric brake levels come into play, vital when flying inland.

Skydiving conversion student often acidently fullstalls a paraglider on course and there is a good reason for it. Skydiving is taught methodically, every flight includes 2 flares - brakes fully engaged and arms straight, which slows the skydiving canopy but won’t stall it. Releasing both brakes fully... a small pitch, no big deal.

Paraglider WARNING brakes are much more sensitive and it will stall "before" brake is fully engaged! Stalling a paragliding wing can go terribly wrong. Face diving into the wing, because it has a much more dynamic force to recovery which needs to be managed correctly. Standard Paraglider equiptment and environments don’t make for good second chances when you stuff up. Lacking altitude and inadequate slow opening times with a standard fitted round reserve can be fatal. Our reserves will save lives if deployed at adequate opening heights if well maintained but they are not made to escape injury. Some recommend landing in trees for better outcomes.

Paraglider stall exit is a sensitive complex Manoeuver, taught only in a safer environment - SIV course over water. Don’t try it otherwise.

Paraglider landing flare is easy but made closer to ground done at round 1mtr / 3ft. Done with feeling. We don’t aim to shut it down but to lightly touch down and run out the rest momentum. Brakes can also be slightly applied on final to bring it down in tight spots or wing flapping.- for that we need to know the stall point. (advanced piloting only) Paraglider pilots always land into wind, turning at low altiudes or just turn wing on standing. A wind gust can catch a pilot out - Face plant!

Skydiving canopy landing and flare speed is turned up several notches eg. 9m/s sink, finals must be done hands up to get a large enough flare to slow it down. Stage 1. 1/2 braked slows sink to 1/2 and converts into horizontal speed. Timing is stressful because of the high risk involved getting it wrong can kill you. Skydivers are taught - Look at horizon, DON’T flare if you think your going to die! Only flare when you know your going to die! Then you’ll time it right!

Landing circuits are often programmed if wind changes too bad it’s a downwind landing - slide in or Parachute roll. No wind landings are so fast often they can’t be slowed enough to run it out - means a Face plant for a paraglider pilot.

1. Once brakes are fully engaged the glider drops back, hold brakes deep, Do not let the brakes get snatched out of your hands and be prepared for some rock and roll.

2. When the Paraglider is back above head. Look at it!

3. Slowly bring brakes up evenly to round shoulder height whilst increasing the wing span. (Till that stage you’ll be rocking left and right, fighting against the force of it wanting to snatch the brakes out of your hands.)

4. Once wing span is almost fully open. Let the brakes out keeping a little pressure all the way though. The glider will surge, stop the surge power by engaging brakes and just enough to stop it from collapsing. But then make sure you let it fly with brakes fully open or it can stall again.

Notes: Releasing the brake should be a completely smooth, even, slow graduation all the way though. Time frame 3 to 5 seconds. Height loss min 60m/200ft to 150mtrs/500ft

SIV Training Fullstalls. These videos below have been conducted in a safe environment, simulated training high over water safety vest and 2 rescue parachutes.

Boat is on standby, which will be at the pilot within seconds for rescue.

Lead in and recovery to flyback (flying backwards)

beautifully done and stable. Release seemed ok, but not checking the forward dive was his failure.

Falling into paraglider doesn’t always end so well as in this case. Here he falls though it escaping without being trapped but still twisting first reserve deployment with twists still continuing.